I'm excited to announce my new Python training courses for the first part 2012. These are intense hands-on classes that are strictly limited to 6 attendees. Unlike an online course, you'll get to escape work, your family, and friends for several days while you become completely immersed in the topic at hand. Needless to say, you won't be disappointed. 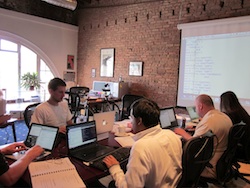 A Python course in action

So you never got to take a compilers course in college or you're simply a masochist looking to take your programming skills up a few levels? Then this is the course for you. Come to Chicago in January and spend 4 days writing a compiler for your own programming language and have it run on top of rpython, the implementation language used by PyPy. In this course, you'll learn about all of the major parts of what makes a compiler work, see a bunch of advanced Python programming techniques, and dive into all sorts of low-level black magic. Why? Because it's fun. Update: seats are still available!

Join special guest Mike Müller, founder of Python Academy for an exclusive 5-day in-depth course on using Python for Science and Engineering. Topics include numerical computing with numpy/scipy, plotting, working with large data files, Python extensions, testing, version control, and more. I'm pleased to have Mike join me in Chicago for this special course before he heads to PyCon'2012.

A 4-day in-depth exploration of everything you could possibly want to know about concurrency and distributed computing in Python. Major topics include threads, multiprocessing, event-driven I/O (async), message passing, and coroutines. If you must know, this is the same workshop that spawned my infamous talks on the Python GIL. Past participants have described this workshop as combining the contents of about three different university systems courses crammed into the span of four days.

Go far beyond the basic tutorial and learn the secret Python programming techniques used by the authors of frameworks and libraries. Topics include some of Python's most advanced features including object implementation, descriptors, decorators, metaclasses, packaging, optimization, and more. Simply stated, the aim of this course is to cover the entire Python programming language, leaving no stone unturned.

A thorough introduction to Python for software developers, scientists, and engineers who already know how to program in another programming language. A major focus of this course is on using Python to process various kinds of datasets, especially those associated with systems scripting and open data sources. In addition to Python, this course includes a basic introduction to some of the scientific tools including numpy and matplotlib. If you're looking to improve your Python programming skills after complete a more basic tutorial, this is a great course to take.

2012 marks the start of my fourth year of offering Python courses to small groups in Chicago. One of the best parts of these classes is the interaction that results from putting programmers with different backgrounds together in the same room. Everyone who attends wants to be there and conversations are likely to cover just about any topic imaginable (not just computers). I learn new things with every class and think it's a lot of fun. Hopefully I'll see you in a future class!