Using Python to Encode Cassette Recordings for my Superboard II

See Part 2 for a discussion of decoding audio

My family's first computer was an Ohio Scientific Superboard II--something that my father purchased around 1979. At the time, the Superboard II was about the most inexpensive computer you could get. In fact, it didn't even include a power supply or a case. If you wanted those features, you had to add them yourself. Here's a picture of our system with the top of the (homemade) case removed so that you can see inside. 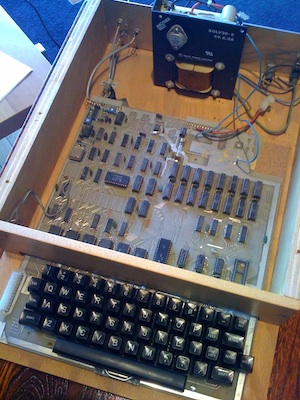 To say that the Superboard II is minimal is certainly an understatement by today's standards. There was only 8192 total bytes of memory and no real operating system to speak of. When you powered on the system you could either run the machine language monitor or Microsoft Basic Version 1.0. Here's a sample of what appeared on the screen (yes, that's maximum resolution): 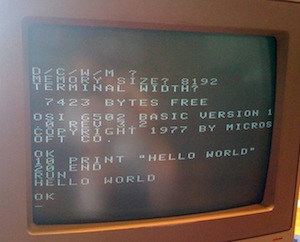 Much to my amazement, our old Superboard II system stayed in the family. For about 20-25 years it sat in the basement of my mother's house surrounded by boxes. After that, it sat for a few years in a closet at my brother's condo. Occasionally, we had discussed the idea of powering it up to see if it still worked, but never got around to it--until now. About a week ago, my brother threw the old computer along with an old Amiga monitor in the back of his car and headed east to Chicago. After some discussion, we decided we'd just blow the dust out of it, power it on, and see what would happen.

Unbelievably, the machine immediately sprang to life. The above screenshot was taken just today. Since powering it up, I've written a few short programs to test the integrity of the memory and ROMs. Aside from a 1-bit memory error (bit 2 at location 0x861) it appears to be fully functional.

One problem with these old machines is that they had very little support for any kind of real I/O. Forget about USB, Firewire, or Ethernet. Heck, this machine didn't even have a serial or parallel port on it. In fact, the only external interface was a pair of audio ports for saving and loading programs on a cassette tape player--which was also the only way to save any of your work as there was no disk drive of any kind. Here is a picture of the back 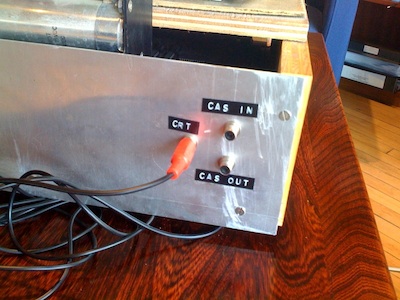 Since the old machine seemed to be working, I got to thinking about ways to program it. Working directly on the machine was certainly possible, but if you look at the keyboard, you'll notice that there aren't even any arrow keys (there is no cursor control anyways) and some of the characters are in unusual locations. Plus, some of the keys are starting to show their age. For example, pressing '+' tends to produce about 3 or 4 '+' characters due to some kind of key debouncing problem. So, like most Python programmers, I started to wonder if there was some way I could write a script that would let me program the machine in a more straightforward manner from my Mac.

Since the only input port available on the machine was a cassette audio port, the proposition seemed simple enough: could I write a Python script to convert a normal text file into a WAV audio file that when played, would upload the contents of the text file into the Superboard II? Obviously, the answer is yes, but let's look at the details.

Python has a built-in module for reading WAV files. Combined with Matplotlib you can easily view the waveform. For example:

After some panning and zooming, you'll see a plot like this. You can observe the different frequencies used for representing 0s and 1s. Again, this plot was created from an actual sound recording of data saved by the system.


Using Python's wave module, it is relatively straightforward to go in the other direction--that is, take a text file and encode it into a WAV file suitable for playback. Here is the general strategy for how to do it:


Here is a script kcs_encode.py that has one implementation.

You can study the implementation yourself for some of the finer details. However, most of the heavy work is carried out using operations on Python's bytearray object. For padding the audio, a constant 1 bit is emitted (a constant 2400 Hz wave). To handle old text encoding, newlines are replaced with a carriage return. Moreover, to account for the slow speed of the Superboard II, a pause consisting of about 80 bits is inserted after each carriage return.

To use this script, you now just need an old BASIC program to upload. Here's a really simple one (from the Superboard II manual):

Let's say this program is in a file guess.bas. Here's how to encode it using our script.

Now, we have an audio file that's ready to go (note: it's rather impressive that a 476 byte input file has now expanded to a 350Kbyte audio file). You can listen to it here. Note that data doesn't start until about 5 seconds have passed.

Now, the ultimate test. Does this audio file even work? To test it, we first hook up the audio input of the Superboard II to my Macbook. 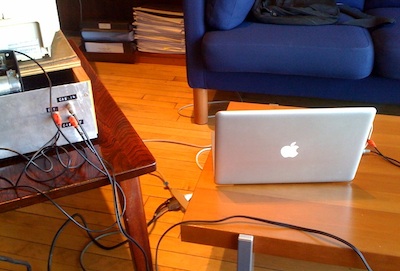 Next, we go over to the Superboard II and type 'LOAD' 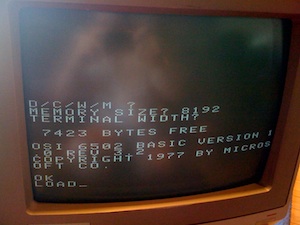 Next, we start playing the WAV file on the Mac. After a few seconds, you see data streaming in (at about 300 baud). Excellent! 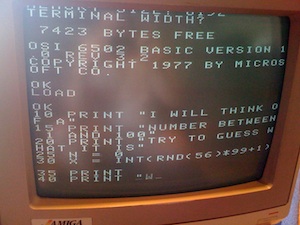 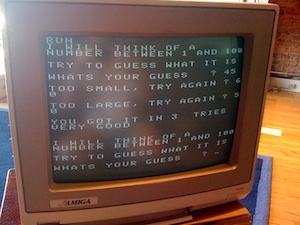 Awesome! Note for anyone under the age of 40: yes, this is the kind of stuff people did on these old machines--and we thought it was every bit as awesome as your shiny iPad. Maybe even more awesome. I digress.

Just so you can get the full effect, here is a video of the upload in action. It's really hard to believe that systems were so slow back then. For big programs, it might take 5 minutes or more to load (even with the 8K limit):

Well, that's about it for now. The power of Python never ceases to amaze me--once again a problem that seems like it might be hard is solved with a short script using nothing more than a single built-in library module and some basic data manipulation. Next on the agenda: A Python script to decode WAV files back into text files.

By the way, if you take one of my classes, you can play with the Superboard II yourself (wink ;-).